On August 8, 2017 Row New York took our Axis Project members out for a day on the Flushing Meadows Corona Park’s Meadow Lake. Row New York began in 2002 with the simple idea that competitive rowing, paired with rigorous academic support for underserved youth, would be able to change the trajectory of their teen years and beyond. Since then, Row New York has taught thousands of young people, veterans and people with disabilities the sport of rowing–and through it the values of tenacity, focus, teamwork, and confidence. Our Axis Project members learned that rowing is a sport that can be adapted to different levels of abilities– despite the visual, physical or cognitive impairments one may have, all levels of disabilities have the potential to excel at rowing. Row New York’s safe and supportive adaptive rowing program provides land-based and on-water workouts for recreation, competition, and rehabilitation. Our members began the program learning the basics of rowing on ergometers and then moved onto on-water rowing on stable barges. Wheeling Forward received awe-inspiring feedback from our Axis Projects members that we can’t wait to see who decides to participate competitively in the future! 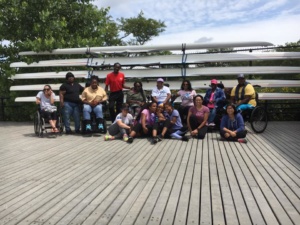 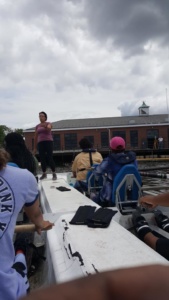